Temperance : Eat not to dullness; drink not to elevation.

Silence : Speak not but what may benefit others or yourself; avoid trifling conversation.

Order : Let all your things have their places; let each part of your business have its time.

Resolution : Resolve to perform what you ought; perform without fail what you resolve.

Frugality : Make no expense but to do good to others or yourself; that is, waste nothing.

Industry : Lose no time; be always employed in something useful; cut off all unnecessary actions.

Justice : Wrong none by doing injuries; or omitting the benefits that are your duty.

Moderation : Avoid extremes; forebear resenting injuries so much as you think deserve.

Cleanliness : Tolerate no uncleanliness in body, clothes, or habitation.

Tranquility : Be not disturbed at trifles or at accidents common or unavoidable.

Chastity : Rarely use venery but for health or offspring, never to dullness, weakness, or the injury of your own or another's peace or reputation.

Humility : Imitate Jesus and Socrates.
Posted by KGT (aka Cagey) at 21:07 No comments: 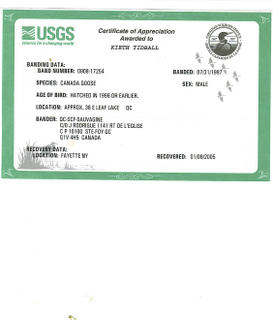 The morning of the last day of the waterfowl season went well in the geese fields, but as there were still dekes in the water in front of my blind, we decided to finish the season at the marsh, with Fiona, who sat out the morning field hunt. And it was at it should be. Within minutes of being in the blind, a flock of three black ducks buzzed us, but I was in the water cleaning the snow off of the diver dekes. Still, Mike's calling got them to within 60 yards coming straight in before they spied me in the spread and flared out of the county.

We saw a few more ducks way out in the lake, called a bit, reminisced about our favorite memories of the year's waterfowling, and agreed that it had been a magnificent season. We decided to stay until dark, close it out right. We tallied up Fiona's retrieves, and counted 119 on the board. Of course, we resolved to get her to 120, as if it mattered to her. Forty -five minutes later we were running out of light with no real prospects for getting another duck for the Queen of Canoga. I began to look at my watch, noticing lights flickering, winking on across the lake. We were losing light fast, and then from the north a solo black duck appeared in the middle, angling south to the mouth of the creek. I jumped on him with the timber call, and Mike backed me up with some sweet chuckles and we turned him on a dime. He came straight into the spread but looked like he was going to hang up right at fifty yards. He actually got to forty five before back pedaling and I called "Take-em!" to Jim, who hit him hard, solo, with the first shot just as the duck sat down, followed by a solid second tap on the water for good measure.

We were rejoicing. Last bird, a black duck, in fading light, Fiona's 120th retrieve, and so on. Leisurely walking from the blind to the shoreline to savor watching Fiona work the bird, I was shocked to see the bird attempt to fly away, after laying there ���dead��� for 30 seconds or better. The duck flapped about, got upright and began a ���swim and evade��� game with Fiona. Our Queen of Canoga stayed with her mark though, until the bird dove. By this time Jim and I were wading far out from shore, guns in hand, but reluctant to shoot too near Fiona. The bird dove over and over again, never coming up where expected. Each time the duck surfaced, I would give Fiona a new mark and she would be after it. I was feeling that sick feeling of losing a bird in the fading light and choppy waters, a terrible way to end the season. But the duck made a fatal error on one dive, and popped up closer to shore. Fiona did the geometry, anticipated the next dive and cut off the bird���s escape route. When she got the grip, she looked as if she would never let go.

So Fiona saved the day. Fiona ended our season in fine style. I saw her in her tenth year retrieve a bird in grand style, showing guts and brains both, like the 119 before, but better. I saw the decoys bobbing in her wake, silhouetted against the dusk. I saw her tail wagging in the water. I saw my friends around me and the birds flying still, south. I saw the wind on the water. And it was as it should be. Amen.
Posted by KGT (aka Cagey) at 01:05 1 comment:

There is only one thing worse than diving in...and that is thinking about diving in.

But someone's saying something....something's being said.
I can't see you, but I know you're here.
So I've skipped the introductions, and the broadway play. I'm mixing in the stuff of alchemy; politics, personhood, and the pursuit of potpouri. The message is the mix. Get it?
Posted by KGT (aka Cagey) at 02:11 No comments: