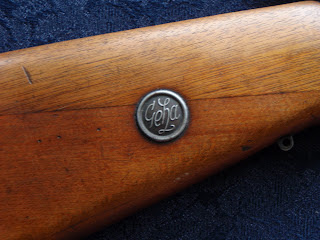 In the early spring of 2002, when Willis Cosad was packing up the accumulated ephemera of 90 plus years of occupying what would later become Canoga Creek Farms and Conservancy, a decision was made by Willis' son, executor of the Cosad estate, to sell at auction and yard sale all the items not desired by family members. Included in this collection of odds and ends were old farm and shop equipment, including almost one hundred year old stable equipment and tack. Of course there were the expected antique furnishings, and knick knacks, but what caught my eye, especially as I envisioned myself as the new "owner" of the farm and steward of its natural resources and bounty, was an old bolt action shotgun.

I picked up the gun, and Willis' son approached. "That was Dad's goose gun," he said. "It was his favorite." Sold. Though I would have paid significantly more, I acquired the gun for $75.00.

As chance would have it, I had become friends with Nick Tooth, a gunsmith who was responsible for the intricate checkering on the wood for some of the fancy but no longer made Ithaca Classic Doubles (closed their doors in May of 2003--for a brief and incomplete history, click here)
Nick had a look at my prize and quickly pronounced that its future should be as a deer gun. We drilled for some scope mounts, mounted a red dot, and the GEHA has performed well as a big game gun. 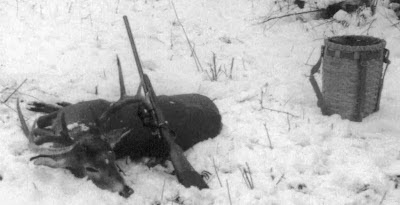 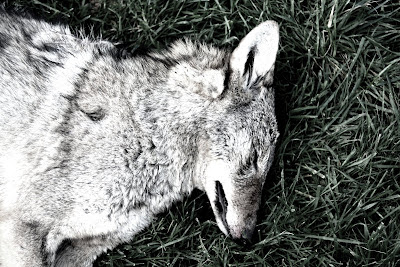 Recently, I discovered some research on GEHA published on the web. The article, entitled GEHA, A Little-Known Prime Example of Germany Maintaining its Arms Industry Between the World Wars, sheds additional light on my "deer gun," which I thought would be worth sharing. The following is excerpted from the article: “What on earth is a GEHA?” Simply put, it’s a converted Mauser Gewehr 98 rifle bored out for a 12, 16, or 20 Gauge shotshell, with 1 shell in the magazine plus 1 in the chamber capacity. It is half-stocked, and the wood is usually military grade and was never changed from the Gewehr 98 to the GEHA. It uses a sprung, detachable bolthead that fits over the old Gewehr 98 bolthead, and also utilizes a receiver strengthener/shell deflector that was added because so much metal was removed from the original rifle action. A new trigger assembly and triggerguard were also fitted so as to be more suitable to a shotgun. For one, the triggerguard was quite beefy. For another, the trigger itself was single-stage (as opposed to the two-stage military rifle trigger of the Gewehr 98). These trigger and triggerguard features are shared by the Remo and Hard Hit Heart, the two other Mauser conversion shotguns. Another feature of these guns is that the bolt handles were bent."

"The GEHA was simple. It was cylinder-bored; although a few GEHA’s have been noted with fully-choked bores, they seem to be in a small minority. Frank de Haas notes one of the guns appearing in his book Bolt-Action Rifles co-authored by Dr. Wayne van Zwoll. It retained the military Gewehr 98 stock, and was a no-frills gun without any provisions for a front sling swivel (although it retained the rear swivel mount from the Gewehr 98). The hole for the Gewehr 98’s bolt takedown donut was filled with a medallion reading "GEHA" in script. It was put on the market around 1920 or 1921."

I continue to hunt with this gun today, and am planning to get further information on it, especially specifications I do not have the technology to measure or ascertain, likely with the help of Turnbull restoration, who have done minor work on the gun recently. Those details will be appended to this post. Detailed photos below. 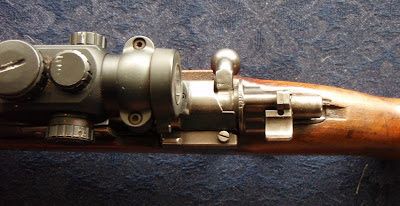 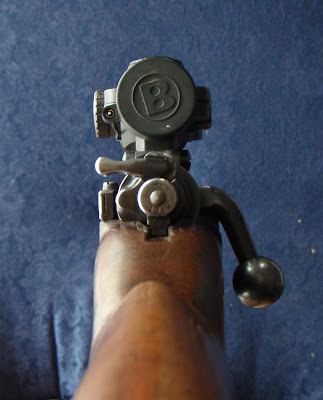 Labels: coyote, geha, guns and such 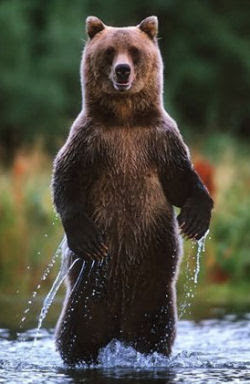 This comes from my father, a minister and my original outdoors mentor. Enjoy.


An atheist was walking through the woods.
"What majestic trees!"
"What powerful rivers!"
"What beautiful animals!"
he said to himself.

As he was walking alongside the river, he heard a rustling in the bushes behind him. He turned to look. He saw a 7-foot grizzly bear charge towards him.


He ran as fast as he could up the path. He looked over his shoulder & saw that the bear was closing in on him.

He looked over his shoulder again, & the bear was even closer. He tripped & fell on the ground. He rolled over to pick himself up but saw that the bear was right on top of him, reaching for him with his left paw & raising his right paw to strike him.


At that instant the Atheist cried out, "Oh my God!"

Time Stopped.
The bear froze.
The forest was silent.

As a bright light shone upon the man, a voice came out of the sky. "You deny my existence for all these years, teach others I don't exist and even credit creation to cosmic accident." "Do you expect me to help you out of this predicament? Am I to count you as a believer"?

The atheist looked directly into the light, "It would be hypocritical of me to suddenly ask you to treat me as a Christian now, but perhaps you could make the BEAR a Christian"?

The light went out. The sounds of the forest resumed. And the bear dropped his right paw, brought both paws together, bowed his head & spoke:

"Lord bless this food, which I am about to receive from thy bounty through Christ our Lord, Amen."
Posted by KGT (aka Cagey) at 15:10 No comments: 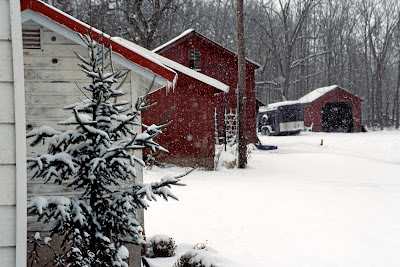 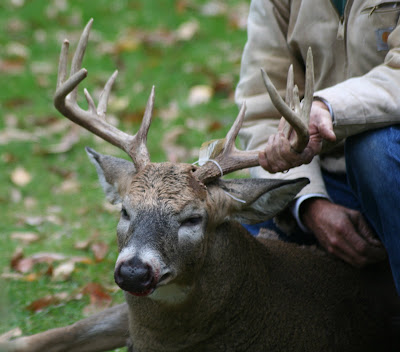 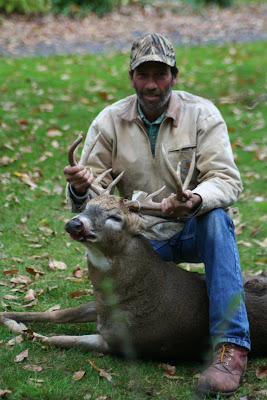 Yesterday, George H. took a beautiful 11 pt buck out of the Canoga Creek Farm & Conservancy. I won't tell George's story for him in hopes that we will hear from this future Grouser in person on the subject, but suffice it to say that this may be his best archery deer to date, and it is the second "big boy" to grace my lawn since I've been the steward of this here parcel. Hearty congratulations to George.
Posted by KGT (aka Cagey) at 19:51 No comments:

Before... (with sketches of pothole locations) 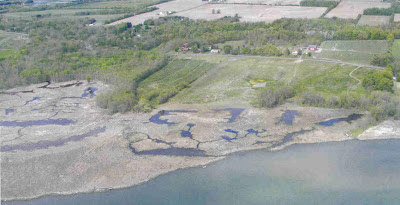 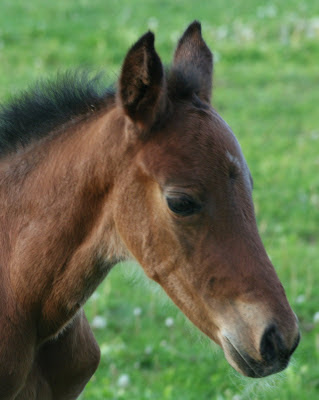 Ella, our thoroughbred, was bred to a registered Cleveland Bay stallion almost a year ago. Their lovechild is now munching grass at Canoga Creek Farm & Conservancy. Welcome "Wicca"!!
Posted by KGT (aka Cagey) at 09:34 1 comment:

Recently the newly reinvigorated Finger Lakes Chapter of Trout Unlimited decided to do an experimental stocking of the lovely spring creek called Canoga. Needless to say, the Canoga Creek Farm and Conservancy has been "encouraging" this action for some time now. What can I say, membership to the chapter is inexpensive and a good investment. 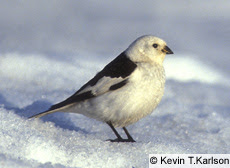 Have been noticing pre-migratory flocks of Snow Buntings using the newly established grassland near the lake (you can see it in the background of the ice skating pictures below.) Amazing synchronized flock maneuvers.

For more on Snow Buntings, see http://www.birdsbybent.com/ch91-100/snobunting.html
Posted by KGT (aka Cagey) at 10:54 No comments: 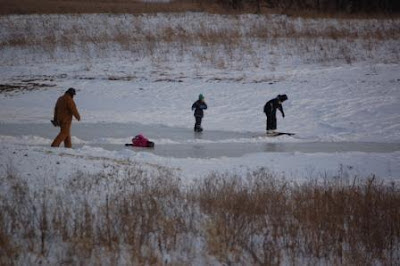 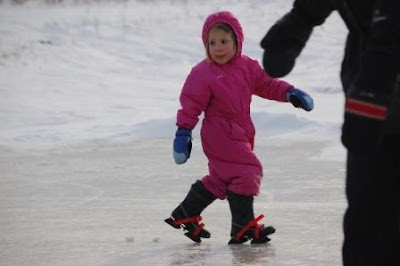 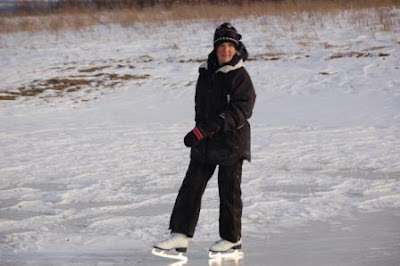 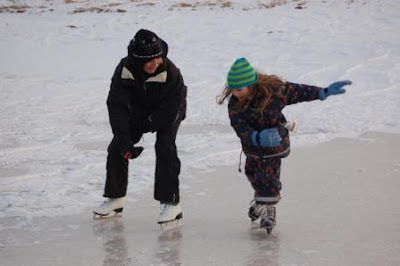 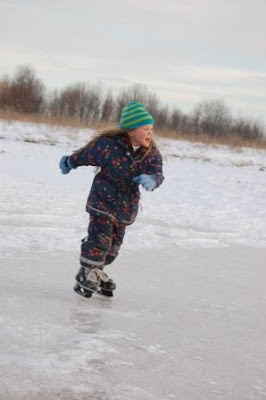 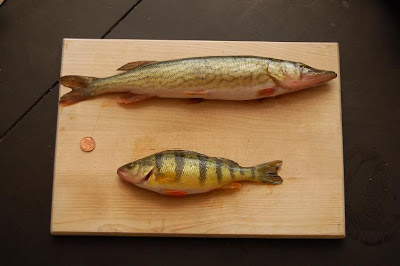