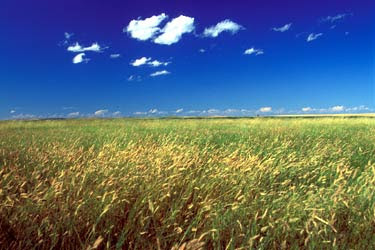 Their assessment was generally positive. They said "Overall the site looked very good as far as establishment. There was excellent wildrye throughout. There were differences in stand establishment and survival with the poorest along the Southern side of the field. The planted and/or volunteer clover which overlapped the warm season grasses is posing serious competition as well as golden rod and other broad leaf weeds. On the North and West side of the field there was some dense rows of warm season grasses... some of it had little weed competition but the farthest area to the North had an excellent stand of warm season grasses. We also noticed more little bluestem on the North side which may have been due to how the seed was planted. Most of the weeds are broadleaved so that an application of 2,4-D is possible and would improve the stand. This would be a good year to do this to insure a vigorous stand of warm season grasses which may then have a chance to maintain itself with future encroachment of broadleaf forbs."

The team also noticed the prairie cord grass and Canada blue joint that was planted by Ducks Unlimited and Cayuga Lake Watershed volunteers is still growing on the edge of the field in the wetland margin.

I am particularly intrigued/encouraged by the following in their brief report/assessment:

The reason this is of interest to me is that the areas described on the field are not in the conservation easement area, but were planted at the same rate as the rest of the field. The difference, from a management perspective, has been that, given those areas are not in the easement and therefore not restricted as to use, I have been practicing classic "timely mowing and/or grazing"...basically taking a cutting of hay as appropriate on these areas. I am not ready to assert direct causality but think it warrants further consideration.

As I am attempting to convert my entire farm (160 acres) to organic, I am particularly interested in methods of establishing this warm season planting without the use of chemicals. Would there be interest in a scientific trial here? Half of the field hayed/mowed, half treated with chemicals? I think there may be some value in exploring this.

At any rate, I appreciated the focus being on establishing the warm season grasses first, and then managing as habitat for associated wildlife secondarily as appropriate, when there is sufficient establishment. I believe the southernmost swath of the field was not planted to warm season due to excessive rills, so what is there is predominately volunteer or drift. The upland pond and drainage areas were planted to clover for erosion control...should there be changes in these areas (also not planted to warm season grasses)?

I was also very happy to hear about the prairie cord grass and Canada blue joint survival/growth. A group of volunteers who "sweated" (sweat?) on a hot day planting will be pleased to hear of it!

For an interesting discussion of ag practices, grasslands, and birds, try here.
Posted by KGT (aka Cagey) at 12:39 4 comments: