We thank You for this day and for the reasons we are brought together:
For the wild and noble game that we love - and hunt,
and for the energy, courage and boundless love of our dogs,
and for the cold winds and bending sage, and for the rains that pelt man and beast alike.

And for the beautiful guns left by good men long forgotten - who also shared our passion.
And for the paradox of a hunter's life in which he is destined to be misunderstood because
he is compelled to kill a few of what he loves most.

And for the dark and ancient land with all its secrets, for the friends who last a lifetime and
for the awful knowledge that we pass through this life but once - and by this we are humbled and feel your presence.

The Bittersweet Buck and the Struggle with the Sublime 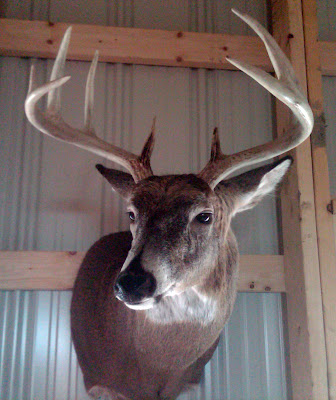 (A true story--Dec 2009)
"I am in mourning, and am in pain" I realized, while sitting in a treestand overlooking a favorite field, pondering the merits, or the futility, of hunting a territory that had recently experienced the reduction of its deer herd by one magnificent 10 pt buck.

"When a quality buck is taken on a QDM area, the pride can be shared by all property hunters because it was they who produced it by allowing it to reach the older age classes which are necessary for large bodies and antlers." That's what they say. Problem was, I felt considerably less pride and palpably more of some wicked brew of remorse, envy, and despair.
I had scouted this buck in the off season, he and his larger pal. I had muffed a tough straight down archery opportunity on him; had stalked him almost to success, only to be blown out in one case by a nearby coyote bedded down, and in another by the presentation of two unethical shots (a doe and a smaller buck directly behind in one, a silhouetted target on a ridge the next). I jumped him and chose not to take a "Texas heart shot," moments later trying a longer shot through brush to no avail. I had had my encounters, had had my chances, and had come up short.
It was the last weekend of shotgun season. It was time to "push the gully" and shoot a doe or two, or perhaps get a shot at one of the big boys (there is no shooting small bucks here during gun season). I knew there was a risk that one of these wall-hangers would pop out and be taken by one of my friends and fellow hunters rather than me, but I was willing to suffer that, or so I thought.
We went over the rules of the hunt; I assigned Gary, a relatively "green" hunter, to the prime stand covering the northern most outlet of the gully- we'd push it from the south. Other hunters were posted on the other escape routes.
The push yielded a few does, but they squirted out into a field with buildings as a backdrop...no shot. Two small bucks came out of the thicket to the west, but were undersized and no shots were fired. The drive was coming to an end, when Dave, in a stand on the other side of the gully motioned to Eric that there was a good size buck hiding in a large Beech tree top that was down and laying across the creek in the gully. As Eric pushed into the thick cover, the buck jumped, but hugged the ground and low-crawled like a rabbit. He hadn't gone far, but seemed to disappear. Eric stomped around in the brush, and finally the buck had held for as long as he could, exploding out from under a log up the east side of the gully right up the switch back trail towards Gary. A shot rang out. Only one.
It took me much longer to reach Gary and the downed deer than Eric, as I was on the other side of the gully. While I was en route, the buck had laid down in the open pasture east of the gully for awhile, but had bolted as the hunters approached to finish it off. A volley of shots was heard and the buck was down for good. Pictures were taken of that trophy, with my woods as a back drop, in the back of my truck, but not with my proud face or slightly shaking hands wrapped around that perfect 10 point rack. He'd score 130 easy, probably better.
That was yesterday. I spent all night tossing and turning about Gary's success, uncomfortable with my unresolved and confused feelings about it. This morning's sit in the stand felt like a work-out, a forced exertion rather than a joy or pleasure. I watched a single red leaf float to the ground. A doe passed within range but I was uninterested in killing her. I thought about how shocked Gary seemed, how unaware he seemed of what he had done, and then how he gradually looked relieved and quite happy as the adrenaline was replaced by a sense of completion and accomplishment. The doe looked over her shoulder. I thought about how Gary shook my hand and told me privately that this was his first big buck, about the gratitude he exhibited in his facial expression and in his simple words. "Thanks so much Keith." The doe took two steps and looked back again. I thought about the sick feeling I had when I saw the buck on the ground, those antlers I had studied with binoculars, from tree stands, even at full draw at 6 yards below me. The doe bolted at the sound of a grunt, and a 6 point yearling came out of the thicket, chasing her. I raised my gun and followed the buck's shoulder. "Boom," I whispered.... but did not fire. "Nice shot Gary." 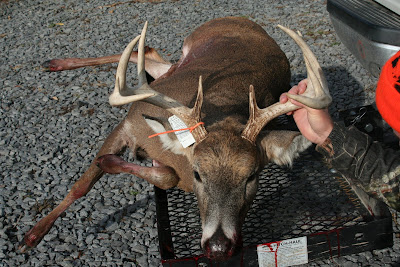 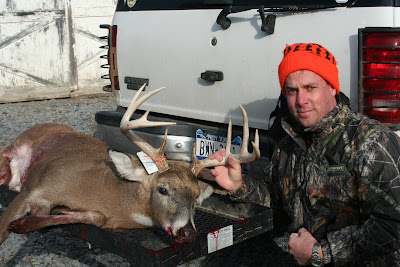