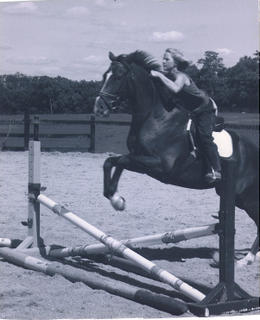 It is true that horses inhabit our dreams, carrying us to safety or on wild adventures. Some of our dream horses fly, others have magical powers. Whatever our dreams of horses might be, they inhabit a universe of freedom and power. They also involve a lot of work, care and sacrifice. Horses and riders achieve great heights, some in jumping, some in dressage, some on endurance rides.

Horse riders also dwell in our dreams, as rescuers, vanquishers, and villains. Or as bearers of tidings, of good or ill. Why do we ride? Why does she ride, especially? The horse persists because of her, perhaps inspite of him and his combustion engines, which I have been led to believe by a certain yeoman lawyer I may have to part with soon. So will I ride? I fear the spirit is willing but the flesh is weak.
Posted by KGT (aka Cagey) at 16:55 2 comments:

�Right to Farm� and Addressing Farm/Neighbor Conflict:
A Role for County Agriculture Enhancement Board

While working to create a Comprehensive Plan for the Towns of Fayette and Varick, we have had numerous discussions about Farm/Neighbor Conflicts, concentrated animal feeding operations, or, �CAFOs�, and the NYS �Right To Farm� laws. Recently we have begun to discuss smaller Animal feeding operations (AFOs). Early in 2005, I was appointed to the Seneca County Agriculture Enhancement Board (AEB), where I proposed that the AEB could potentially serve an important role as a liaison between the agriculture community, the public at large, and local municipalities who find themselves embroiled in sometimes heated Farm/Neighbor Conflict Issues. This notion received a relatively warm reception, qualified with reservations about what limitations NYS Right to Farm laws might place upon any proposed AEB role.

In late June, I was afforded an opportunity to pose a question to Ruth Moore, Deputy Commissioner, New York State Agriculture and Markets, at a conference entitled �Open Space and Farmland Conservation in New York State: Why is it important to your community? What tools will work in your community?� The question was:

�Due to strong Right to Farm Laws, there are limited options for municipalities to deal with community concerns over �CAFOs� that are perceived by some to be in conflict with other notions of what �Open Space� and �Farmland� are. What are ways to encourage farmland protection, without running into trouble with �mixed� feelings on �CAFO� sites and frustration over conflicts between farmers and their neighbors?�

The answer given by Ruth Moore was:

"We need to communicate to our communities both as government entities and as farmers what our farmers are doing to maintain good stewardship of that land. We do have an agricultural environmental management program that helps livestock operations in particular, to install best management practices on their farms to protect water and air quality. And our farmers by and large are doing a great job of that. There ha(ve) been some concerns raised about the larger livestock operations. I just want to emphasize that good environmental stewardship is basically size neutral. You can have a small farm that's not doing a good job and a large farm that's doing a wonderful job and vice versa. Its a matter of taking the tools that we have and what we've learned working with our land grant institutions on how to protect the water quality and air quality in our communities and really aggressively implementing that. We've spent $45 million in this state to help local governments, soil and water districts, work with our farmers to plan for best management practices and install those best management practices on their farms. And I applaud local communities that are committed to farmland protection in the face of sometimes neighbor concerns that -- and legitimate concerns - that they need to balance community concerns and the needs of our farmers to employ practices to run their businesses."

Though I appreciated the answer, I was as unclear as ever on what we could actually do.

I invited Bob Somers, Chief of NYS Agriculture and Markets Department�s Agricultural Protection Unit, to come to an AEB meeting, so that we could present our ideas and receive official guidance. We proposed to Mr. Summers that we could envision the Seneca County Agricultural Enhancement Board adding to its function a role of �acting as a �review and advise� body in cases where Town Planning Boards or other Town entities require further input.�

The discussion with Mr. Somers was quite useful. Prior to taking up the issue of the role of the county farmland protection board, or in the case of Seneca County, the Agriculture Enhancement Board, we discussed more generally what local municipalities could and could not do, in terms of regulating farms and farm practices.

According to Bob, the Department recognizes a local government�s right to regulate certain aspects of the storage and disposal of solid wastes within its geographic boundaries.[1] However, AML �305-a constrains local governments from enacting and administering laws that would unreasonably restrict farm operations within a county adopted, State certified agricultural district unless the locality can show a threat to the public health or safety. This is more than aesthetic preference. Districts are established to encourage the development and improvement of agricultural land. In general, the Department believes that local waste management laws should provide exemptions to allow the land application, storage, and/or composting of animal waste, recognizable and non-recognizable food waste, septage, sludge, and composted sludge, or products derived there from, for agricultural purposes on farm operations within a county adopted State certified agricultural district. Certain local permit requirements are reasonable, however, including, for example, submission of copies of Department of Environmental Conservation (DEC) applications, materials and approvals to the local government; provisions for access to permitted sites and information on the activity (e.g., copies of information submitted to DEC to maintain a permit); and a reasonable permit fee.

As regards the role of the Agriculture Enhancement Board (AEB) and CAFO/AFO issues, Mr. Somers saw no problems with the concept of expanding the role of the AEB to include �review, advise, and recommendations� regarding municipality level CAFO/AFO issues. The county Board of Supervisors, who have created the AEB and staff it with appointments, can charge the AEB to assist towns or local governments in dealing with situations in which Right to Farm interests collide with other interests at the local level, especially CAFO /AFO issues. The proposed example of an issue arising at the town level which is contentious being referred by the town planning board, town zoning board of appeals, or Town Board to the County Agriculture Enhancement Board for review, advice, and comment, and then returned to town level for action (AEB comments would be non-binding, non-regulatory, and not directives- AEB comments would be considered studied opinions of county appointed agriculture practitioners, experts, and other agriculture stakeholders) was thought reasonable. The AEB would need to be clear in every case about the Right to Farm laws that are in effect, and also be clear that its opinions were not to be construed as directives for regulation.

The benefits of this approach to farm families and operations would be an added assurance that their projects and proposals were being considered by informed agriculture practitioners or stake holders. The benefit to community residents not involved in agriculture is that they would have an additional assurance of transparency, of the fact that decision making was occurring with the benefit of research, thought, and discussion by a body outside of the town, but with vested interests in the town�s well being. The benefit to town level officials and decision making bodies would be (1) the existence of a public process in which the pace of decisions was measured and predictable, thus reducing the likelihood of rushed decision making due to the power of emotional intensity of adversarial parties in a particular issue, (2) the ability to draw upon opinions of others who are familiar and experienced with the issues, which may buffer individuals and shift attention to decision making bodies and processes, and (3) the basic added value of open dialogue among multiple parties.

In light of this, I suggest that the Fayette and Varick Comprehensive Planning Commission consider the following for inclusion in the agriculture section:

1) the plan(s) should recommend that we institute reasonable local CAFO/AFO permit requirements including requirements for submission of copies of Department of Environmental Conservation (DEC) applications, materials and approvals to the local planning boards; provisions for access to permitted sites and information on the activity (e.g., copies of information submitted to DEC to maintain a permit); and a reasonable permit fee.

2) The plan should encourage the county Board of Supervisors, who have created the AEB and staff it with appointments, to charge the AEB to assist towns or local governments in dealing with situations in which Right to Farm interests collide with other interests at the local level, especially CAFO /AFO issues.

3) The plan should describe a process by which planning boards and zoning boards of appeals can forward issues for comment, advice, review, etc to the County AEB.

The U.S. Department of Agriculture (USDA), Department of Health and Human Services' Food and Drug Administration (FDA), Department of Homeland Security (DHS) and the Federal Bureau of Investigation (FBI) last week announced a new collaboration with states and private industry to protect the nation's food supply from terrorist threats. Four pilot visits will be conducted in September and October. The purpose of these visits is to assess and identify vulnerabilities in the agriculture and food sectors. Over the next year, teams of federal and state officials will travel to all 50 states to meet with all sectors of the food chain. Together, the federal, state and private industry partners will discuss security issues from farm-to-table and consider ways to better protect our food supply. Additional information about agrosecurity can be found on USDA's Web site at www.usda.gov/homelandsecurity; the FDA Web site at www.fda.gov/oc/opacom/hottopics/bioterrorism.html; and the DHS Web site at www.dhs.gov/dhspublic/display?theme=43&content=3802.
Posted by KGT (aka Cagey) at 12:59 No comments: